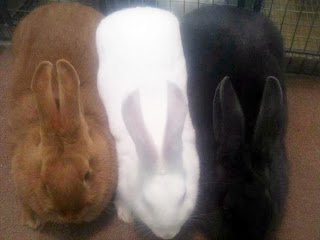 I saw a picture posted by Alan Messick on Facebook showing a Red, a White, and a Blue American from Chris Hemp displayed at Crescent City CA rabbit show.

The American rabbit breed is one of the rarest in the USA and only is recognized in Blue and White. Some people have been suggesting the development of a Red variety in the breed so the American breed could come in Red, White, Blue which is the colors of the flag of USA! Seeing an actual Red rabbit from the American  breed is a surprise and a delight!


Some people think we should practice saving the white and blue and perfecting it before bringing in another variety. They are a very rare breed and we should do everything to help bring there numbers up.

People are breeding more Americans than they were before. The current crop of American breeders are saving the blue and white by driving breeding stock all over the country in the last two years. They have adopted strategies like using blacks as blue carriers to increase the number blues. They have been crossing whites and blues then culling out the unwanted colors. They are working the breed like crazy. If somebody wants to push the envelope and develop a new variety then more power to them. Chris Hemp has been promoting Blues and Whites for about six years. So if anybody knows how to make a Red American it would be Chris. I applaud her efforts! Look how excited people are about a possible new variety of American! That's how to promote a breed.

Have a joyful day!
Posted by Unknown at 9:15 PM No comments:

Other Links of Interest