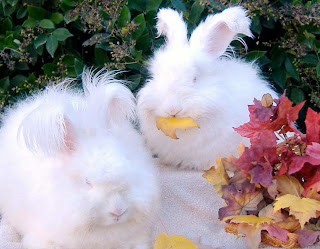 (click for larger image)
I was going through some files and came across this picture of Hanz and Franz. These boys were bought from a breeder by a woman who was concerned they were not getting the kind of care they should be. She contacted me asking if I would like to take them because she was not set up to care for them. She was keeping them in an empty horse stall. So I arranged to meet her during my lunch break from work and I took a carrying cage.

So when I picked them up, I was expecting the worst. Instead I found these gorgeous German hybrids. They were so beautiful and the coats were in such good shape I was thinking I should get a horse barn to keep angoras instead of cages. I took them back to my office and set them in our break room to wait until I could get them home. One of the guys at work said if Santa Claus had rabbits at the North Pole they would look like this.

By asking around I was able to locate the breeder who was able to confirm the German hybrid background. My youngest son Oscar named them Hanz and Franz. Oscar thinks he is so clever.

These rabbits were beautiful but they were dead in a few months. First one died unexpectedly, giving symptoms of wool block. I sheared the other one down and changed his diet to hay. But a few weeks later the other was dead too.

I cried and I beat myself up for weeks for not being able to keep them alive. I was really doubting myself after losing those two bucks. Then a few months after that I got an email from the breeder. They wanted to know if I still had the bucks. Seems all the rabbits from that bloodline had died and they were hoping my bucks were still alive for breeding.

I told them the bucks had died, apparently from woolblock. They said that's what happened to the others. Too bad because they all had such nice coats.

I am so glad they told me. I did nothing wrong. It was a bad bloodline. This impressed on me that genetics is overwhelmingly important for wool production and resistance to woolblock as well.

I do have a scarf made with angora yarn spun from my two little German rabbit friends who taught me something about genetics. And that yarn really got me started on my fiber adventure.

Have a good day!
Posted by Unknown at 8:55 PM No comments:

Other Links of Interest